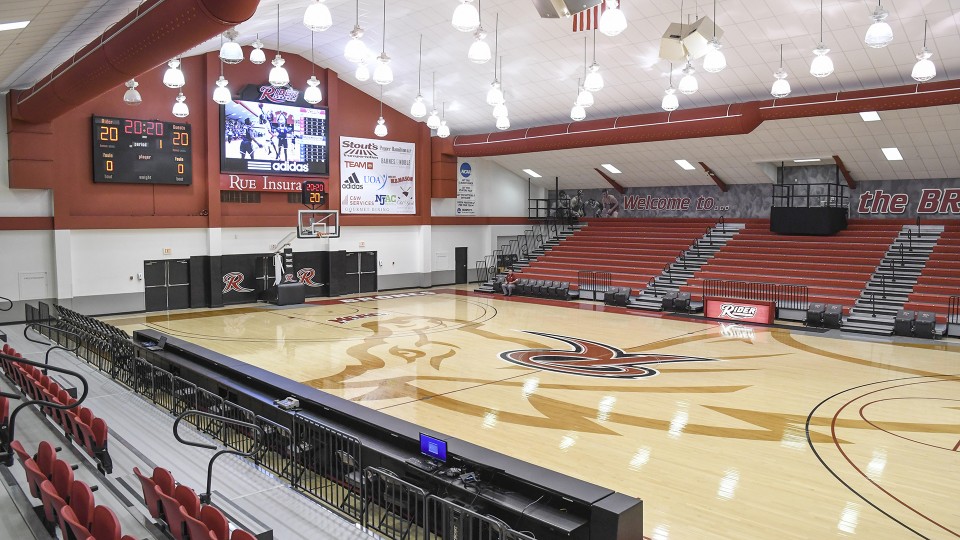 Donors challenge others to join them

Rider University Athletics has received its largest gift ever from two unnamed donors. The $2.5 million commitment is yet another step forward in the University’s campaign to elevate Alumni Gym into a modern NCAA Division I arena.

The gift brings the $17.7 million project more than halfway towards its goal of creating a facility that is at the top of its game.

“Now is the time for all of us to do everything we can to support Rider athletes, and the best way to do that is to invest in the arena project,” says one of the donors. “The project plans are fantastic, and we know just how impactful this facility upgrade will be for the entire University community. Now more than ever is the time for our fellow alumni and friends to do all they can to support this project in a significant way.”

So far, the campaign has raised $11 million from 112 donors and is 62% toward its overall goal, with $6.7 million left to be raised. The anonymous donors hope their gift will inspire others to give in order to bring this project to completion.

“We are incredibly grateful for this leadership gift,” says Rider University President Gregory G. Dell’Omo. “It will help us realize our vision of turning Alumni Gym into an arena and make athletic competitions there an even more enjoyable experience for both student-athletes and the spectators who cheer them on.”

The gift is notable in that, in addition to being the largest gift for Athletics, it is among the largest gifts in Rider history, and it comes after the University announced a $1 million gift to upgrade seating inside the Alumni Gym facility. That gift expanded chair back seating on one side of the gym, added new bleachers and courtside seating, and provided walkway tunnels to create better patron flow and court sightlines.

In recent years, the University has been raising funds to incrementally improve the facility, adding the Jason Thompson Practice Court, new flooring, new lighting and sound system, a video board as well as upgrading locker rooms, team meeting and film rooms and providing new coaches’ offices.

This latest gift will assist in allowing the complete vision for the facility to be fully realized. Plans are to add a center-hung scoreboard with digital display, expand seating along the baseline and in corners, provide luxury box seating with an entertainment suite, create a new and more spacious lobby with new ticketing and concession areas, and install more restrooms.

Adding these final touches, Dell’Omo says, will boost Rider’s profile, helping with recruitment and enrollment across all areas of the University. “In my opinion, few things have the same immediate and positive impact on a university’s reputation as athletic success.”

The upgrades will also significantly expand the athletic training center, add a dedicated locker room for volleyball players and create a new $1.2 million strength and conditioning center for student-athletes behind the facility. To date, $4.3 million in gifts and pledges have already been committed to this phase of the project.

The announcement of this latest gift comes after several notable successes for the teams and student-athletes who compete in the facility before enthusiastic fans affectionately dubbed “the Broncs Zoo.” Among last season’s highlights:

Overall, it was announced in June that Rider University Athletics earned the Pepsi Zero MAAC Commissioner’s Cup title for the first time in school history.

“Although the impact of the pandemic quieted the sports calendar for a time, our student-athletes were never idle,” says Athletic Director Don Harnum. “They continued to actively train and are eager to return to competition. They also are looking forward to fully realizing the coming improvements.”

The $2.5 million pledge marks the 14th time that Rider has received a seven-figure commitment during the past three years.

The largest gift in Rider history was announced in October 2019 when Norm and Elaine Brodsky gave $10 million to name The Norm Brodsky College of Business in honor of the serial entrepreneur’s outstanding support of Rider students and his contributions to their success.

To make a gift to the Rider Arena project or learn more about current naming opportunities, please visit www.rider.edu/bringing-it-home or contact Associate Director of Major Gifts for Athletics Matt Mastrianni at 609-896-5291 or mmastrianni@rider.edu.