A Family’s First Engineer, Giving Back Through the Pharmaceutical Industry 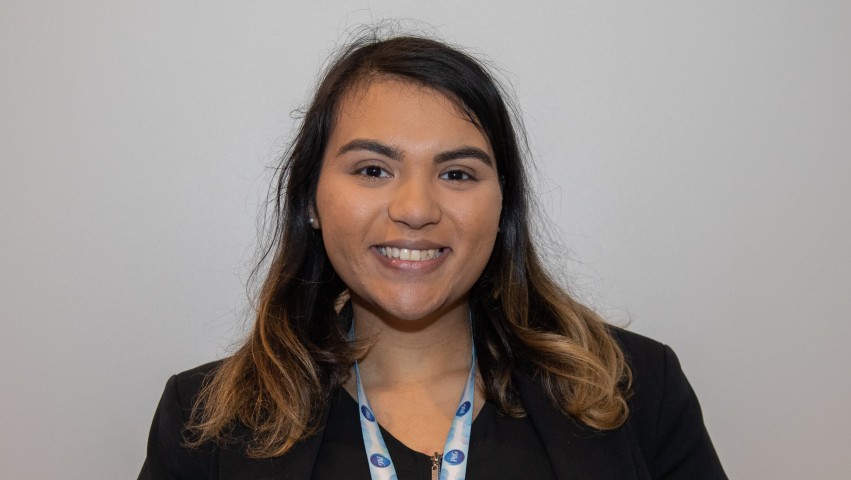 Prepared by cooperative education, Christina Trinidad ’21 accepts a role with Merck to help assure the quality of life-saving medicines

It began as a fascination with homemade cosmetics and entrepreneurship.

Now the path that brought graduating senior Christina Trinidad ’21 to Stevens Institute of Technology has led her to a new career at one of the world’s largest pharmaceutical firms.

“It is just starting to sink in,” she says, “that I will soon be joining a major corporation that helps to save lives.”

Growing up in Jersey City, New Jersey with six siblings, Trinidad always felt appreciative for the opportunities she gained.

“Nobody in my family had ever pursued engineering in college before,” she points out.

A fateful high school fair helped determine her future path to Stevens, when a project to fashion homemade cosmetics from available materials blossomed into something more.

“All my friends were suddenly asking us to buy them,” she laughs. “That was eye-opening.”

Wishing to stay close to home, she specifically selected Stevens’ chemical engineering program because it would provide excellent return on her tuition investment.

“My mother cried when we received the acceptance letter,” recalls Trinidad. “She had not gotten the opportunity to go to college.”

Joining Stevens’ STEP program, the new student arrived on the Hoboken campus earlier than most first-year students, and quickly bonded with her fellow early arrivals.

“You’re not typically happy to go to school during the summer, and I wasn’t at first. But the positive aspect of making friends before even starting my first classes was tremendous,” Trinidad says. “Plus, I was eating great Hoboken food the entire summer.”

Once the semester began, Trinidad began regularly visiting the Stevens Career Center for advice and to develop new skills.

“Christina shared her hopes and dreams with us, trusting us to help her,” noted former Career Center executive director Lynn Insley. “Participating in the Cooperative Education Program, she learned at every step along the way, discovering herself and her talent until she found and accepted the full-time career that was right for her.”

“I arrived at Stevens with no resume, no network, no public presentation skills,” notes Trinidad. “They really took me under their wing. I can’t say enough for the Center’s staff and leadership.”

She soon settled upon and entered the university’s five-year Co-op Program.

“Stevens Co-op is an exceptional opportunity to receive career-related support during time at Stevens,” explained Insley. “The program provides individualized career and planning guidance that allows students to identify an appropriate career path that aligns with their interests and talents.

“The majority of students participating are essentially functioning as entry-level engineers by the end of their junior years — and, consequently, they are highly recruited during their senior years.”

Trinidad’s first co-op experience was at the petrochemical firm BP, followed by a second co-op at Keurig Dr Pepper as a quality engineer and then a summer stint in Johnson & Johnson’s consumer division.

“I really got the entire range of experience, from the petrochemical industry to beverages to consumer products,” she says of her co-ops. “Still, manufacturing was always my primary interest because of the impact it makes on society.”

Indeed, the helping aspect was very important in Trinidad’s decision to apply to Merck.

“The pharmaceutical industry is saving lives; my own father takes medication for diabetes,” she explains. “A lot of sacrifices were made for me to be able to go to college.

“I wanted to find a role that would allow me to give back, and now that is going to happen.”

“Part of the interview involved literally recording my answers on video to some pre-set questions,” she says. “This is part of their usual hiring process. I also did a more or less conventional video interview.”

But as the field narrowed, the final rounds became different from anything she had ever experienced.

“My Stevens education really helped me there. It was a different kind of challenge, but I solved it.”

Trinidad will join Merck’s rotational program in spring 2021, working and learning at several locations nationwide before assignment to a permanent role to be determined — possibly in the firm’s central manufacturing facility in nearby Pennsylvania.

“I will be working in all aspects of manufacturing and supply chain; my end goal is to be on the plant floor,” she says. “I have previous experience there, and I love the constant motion, the constant challenge of keeping it running, of maintaining high quality in the products and in the efficiency of operations.”

Throughout her Stevens years, Trinidad has remained active in campus groups and extracurricular activities, including membership in the Stevens chapter of the Society of Hispanic Professional Engineers; work as a resident assistant in a dormitory; service as head of the Student Government Association’s professional subcommittee; and time as president of the diverse national Omega Phi Beta Sorority, Incorporated.

“Each of these positions has helped me learn to articulate myself, grow as a leader, interact with people and learn,” she says. “Being president of a sorority during a pandemic has certainly been interesting.”

As graduation and her new career in pharma approach, Trinidad’s senior year has been as busy as ever — even during a pandemic.

“For chemical engineers, some of the most difficult classes take place during the senior year,” she explains, “and I am working two jobs while completing my studies.”

In addition, Trinidad forms part of a senior design team working on a Stevens capstone innovation project. The group is currently investigating the potential use of discarded eggshells to create catalysts for biodiesel production under the advisement of chemical engineering professor Yujun Zhao. She also serves as a volunteer Co-op Program mentor, answering questions from new members of the program, assisting with presentations and helping students find the best individual placements.

“This is another small way of giving back,” she says. “The Career Center staff were of such great assistance throughout my Stevens career.”

Reflecting upon her Stevens education, Trinidad says the curriculum was perhaps more mathematics-intensive than she originally expected when enrolling, and that “the education was vital and important.”

In particular, chemical engineering professor Adeniyi Lawal was a helpful mentor, both personally and professionally.

“I was often in his office, asking him again and again if I can really handle this,” she recalls. “He had a great attitude toward my concerns. He never simply gave me the answer to a difficult problem I could not solve. He would say, ‘if I give you the answer directly, you will leave my office quickly, thinking you know exactly what to do next time. But I would rather see you solve it, and help guide you, so that you will in fact know what to do next time.’

“He always pushes me to do better. That’s what Stevens does.”