COVID slammed Monmouth U., Georgian Court: Why are their leaders optimistic? 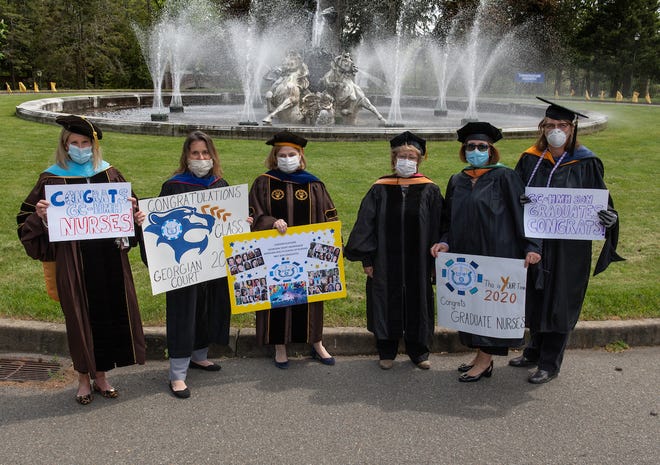 WEST LONG BRANCH – Monmouth University has lost more than $24 million in revenue due to the COVID pandemic, seen hundreds of COVID infections among student and staff and canceled most of its athletic competitions so far this year.

But Monmouth President Patrick Leahy sees brighter days ahead: enrollment is down only slightly, 2021-2022 deposits are ahead of normal, and most sports are set to return in the spring. He envisions a fall semester where all students and staff are vaccinated, many are on campus, and mask-wearing is the norm.

“Our great hope is that by that time our country will be back to whatever the new normal is and that means that most Americans will be vaccinated and hopefully our whole campus community will be vaccinated,” Leahy said in an interview.

At Georgian Court University in Lakewood, the only four-year college in neighboring Ocean County, overall enrollment has been down about 7%, according to President Joe Marbach. But he’s optimistic as well nearly a year after the coronavirus pandemic turned the academic year upside down.

“The biggest (decline) is among transfer students and graduate education students — a program that trains high school teachers for a master’s degree,” Marbach said. “We think a large part of transfers were due to the timing of the shutdown. Most schools went completely online around March 16, 2020, and that March and April timeframe is priority time for transfers.”

Marbach says the university has already changed its recruitment campaign to target more local students and boost interest among those who have a better chance of getting into the small college.

Both higher education institutions, which represent the only four-year college outlets in Monmouth and Ocean counties, have weathered the COVID storm fairly well, the presidents contend.

Each has had its share of positive tests, enrollment declines and limited classroom options. But there is little sign that either has seen a major drop off in enrollment or severe cutback, of the sort that would seem to mandate a significant tuition hike, or major cutbacks or layoffs.

The outlook, however, is uncertain.

Monmouth University, with a typical enrollment of 5,900, including 1,500 graduate students, has been primarily on virtual learning since the COVID shutdowns began almost one year ago.

More than half of all students, about 55%, have been all-virtual since last spring, with the rest either mostly in-person or in hybrid form, Leahy said.

Despite that, enrollment — which has been down nationwide at four-year colleges during COVID — dropped only slightly at Monmouth. The college enrolled 921 first-year students in the fall of 2020, compared with 994 the same time a year earlier, a 7% decrease.

Nationwide, the trend has been about a 13% drop in first-year students, according to the National Student Clearinghouse Research Center.

Spring new student enrollment dropped from 129 in 2020 to 96 for the current Monmouth semester, a 25% slide.

“As far as enrollment projections for fall 2021, we are currently ahead in deposits and we remain hopeful in spite of being in a national enrollment decline independent of COVID-19,” Monmouth University spokesperson Tara Peters said via email.

That reduction has contributed to a tuition and fee revenue decline of about $4.1 million during the pandemic, Peters said, along with another $2.3 million in direct expenses for COVID testing, transitions to virtual learning and personal protective equipment, or PPEs.

More:Monmouth U. students tied to COVID-19 super-spreader event not cooperating: Where was the party?

But the biggest financial hit has been in the area of student housing, which has dropped by about 40%. Campus dormitories and apartments that would normally house 1,700 students, are averaging about 1,000, Leahy said.

“That has been a significant loss,” the president said, estimating an $18 million revenue drop from room, board and parking. “We have to rely on those as part of our revenue mix, that has been one of the big revenue declines.”

The campus routine was also affected by spikes in COVID infections that occurred in the fall, reaching nearly 200 active cases; 190 others were isolated, and 250 students were in quarantine at one point in October. On Oct. 12, officials announced that at least 166 students were under a 10-day isolation after testing positive, blaming most of the cases on an “off-campus event” held two weeks earlier.

Overall, the campus has seen more than 600 confirmed cases since the virus first struck. But that has been reduced drastically. As of Tuesday, there were 14 active cases, with nine students and five employees in isolation, and 19 students in quarantine.

“We did have a spike in the fall that taxed the system a little but fortunately so far this spring we have had much, much more manageable case numbers,” Leahy said. “That combined with what we learned in the fall on handling cades we feel we are really on top of it.”

That has also led to plans for all regular spring athletic competitions, as well as football, soccer, field hockey and cross country, which had been cancelled with other fall sports last semester.

The only winter sport being played right now is basketball. “We are going to try to offer athletic opportunities for all students this spring,” Leahy said.

University officials have yet to decide on a tuition increase for the fall, but with the sharp revenue declines it may be all but certain.

“Every year we take a hard look at tuition prices. We have not made any definitive decisions for next year yet, we have to see how our budget lays out,” Leahy said.

The university instituted a 2.75% tuition increase in the fall of 2020. “One of the lowest increases we have passed along in 50 years,” the president said. “It is usually up to 3% or more. Our hope is that we can continue to be aggressive in maintaining our list price.

“We are in this unique situation as a university that we are still managing the day to day, we are not done with this pandemic and how do we keep our community as safe as possible?” he added. “But we have to ask what do we want to do to continue advancing the university?”

Marbach said transfers are “a big market for us,” making up about half of undergraduate students. He said Brookdale Community College in Middletown and Ocean County College in Toms River account for 90% of Georgian Court transfer students.

“A lot of it is that our missions are in alignment, community colleges are about access and affordability — those are key values at Georgian Court,” he said. “We are serving a local population so it is natural for students to come to Georgian Court from Brookdale and Ocean.”

But unlike Monmouth University, about 90% of Georgian Court classes have been all-virtual since the pandemic began, he said. Much of that is due to the fact that most students do not live on campus.

The in-person exceptions are for lab courses, the nursing program clinics and some others. There has been a limit of 10 people in classrooms, with the rest online.

“A large number of faculty and students were not comfortable in person so most were conducted online and that is something we are seeing again in the spring semester,” Marbach said.

The campus has had far fewer COVID cases than most colleges due to its large virtual enrollment. Since the beginning of 2021, 25 students have tested positive along with five staffers.

With current tuition at about $32,000 per year, and room and board at $11,000, the college saw clear revenue losses from the reduced on-campus living.

While no tuition hike was put in place for Fall 2020, Marbach said a 2.5% increase has already been approved for Fall 2021.

“That is subject to modification if there is a downward turn in the economy,” he said. “Right now, we are hoping there is enough for a bounce back to have that increase.”

Marbach sees hope for the next semester, noting that deposits for the fall are up from 30 last year at this time to 60 so far. He said the student recruiting campaign has changed to target more local students and those “most likely to attend.”

“Rather than casting a really large net we have narrowed our approach to the students who are most likely to attend, most likely to be successful,” he said. “We have been looking at the historical trends where we find students, the SAT range and knowing that a student from western Pennsylvania isn’t likely to come to Georgian Court. There are 100 schools between us and them, it is much more targeted, the students we traditionally attract.”

But he is concerned about the COVID impact on first-generation college students “because many high school students are going to class online, they do not have access to guidance counselors and to them it is a great mystery. We are shifting a lot of our attention to those traditional high schools with a lot of first-generation students.”

Marbach hopes to have a fall semester with all students back as usual: “We fully intend to go back to in-person. That personal attention is hard to get when you are staring at a screen all day.”

Joe Strupp is an award-winning journalist with 30 years’ experience who covers education and Monmouth County for APP.com and the Asbury Park Press. He is also the author of two books, including Killing Journalism on the state of the news media, and an adjunct media professor at Rutgers University and Fairleigh Dickinson University. Reach him at jstrupp@gannettnj.com and at 732-413-3840. Follow him on Twitter at @joestrupp