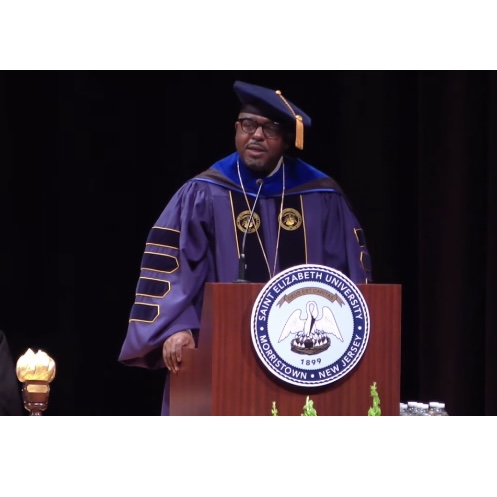 MORRIS TOWNSHIP — While many students were in classes or studying for midterm exams, a new president was installed Thursday to formally begin his term as the eighth president of Saint Elizabeth University.

Some students lined a procession that started outside Dolan Performance Hall to cheer their new leader, Gary Crosby. Inside, robed academics and other leaders of the school wore masks as prayers, traditional ceremonies and speeches officially marked his new office.

“I never imagined that my future would include pouring into the bright, resolute minds of today and tomorrow of students from backgrounds very similar to mine,” said Crosby, who assumed his duties in July and has already proven popular with students.

A native of Hattiesburg, Mississippi, Crosby, 42, comes to Saint Elizabeth from Alabama Agriculture and Mechanical University, where he served most recently as vice president for student affairs. Prior to that, he spent most of his nearly 20-year academic career at Jackson State University in Mississippi, where he also rose to vice president for student affairs.

His groundbreaking arrival as the first man and Black president at Saint Elizabeth, a 122-year-old Catholic institution that until very recently was led by nuns, follows the school going coed in 2016 under his predecessor, Dr. Helen Streubert. Four years later, it achieved university status.

During his lengthy introduction, many new colleagues lauded him, as did his friend and former colleague, Alabama A&M President Dr. Andrew Hugine, who praised Crosby as “an energetic and visionary leader.”