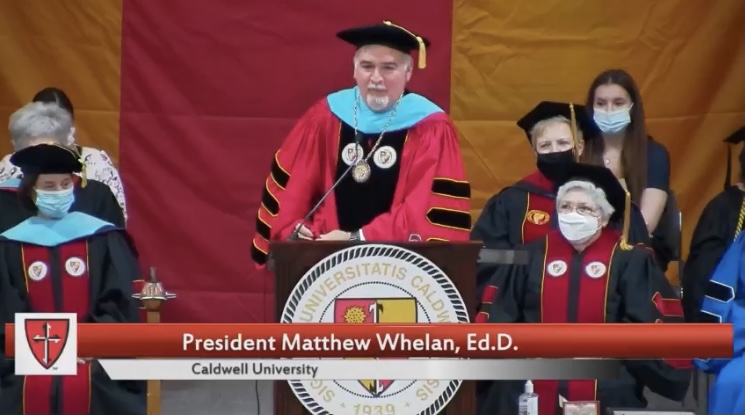 Matthew Whelan, formally inaugurated Friday as the new president of Caldwell University 16 months after taking office, in a COVID-delayed ceremony, joked that he was in the middle of a second first year at the school.

Whelan, however, made the moment one that looked forward.

In his inaugural address, “One Mission, Infinite Possibilities,” Whelan spoke to the students and potential students, saying the future “is filled with infinite possibilities, for you, for your families and for society.”

He also spoke words that their parents surely were eager to hear, pledging the collective efforts of the community for student success, saying graduates will leave “with a degree in the hand and a job on the line.”

“We owe you that,” he said. “That will be our commitment to you.”

The ceremony honored the legacy of the Sisters of Saint Dominic of Caldwell and the rich heritage entrusted to Whelan, the school’s ninth leader and its first male lay president.

Bringing people together in pursuit of education will be a goal, he said.

“We bring many people here from different communities in New Jersey, from around the world, to form a community based on respect, integrity, community and excellence,” he said.

Then, quoting Nelson Mandela, he said, “Education is the most powerful tool you can use to change the world.

“So, here’s what we are going to do. We are going put on our tool belts. We are going to pursue that goal with all of the creativity and energy we have … and we’re going to start now. I commit that to you today as I take the reins and stand on the shoulders of giants … as we protect the legacy and build the future defined by infinite possibilities.”

Former President Nancy Blattner, who served Caldwell from 2009-20, passed the mace, the traditional symbol of leadership and authority, to Whelan.

Steve Reynolds was present to extend a warm welcome and greetings from the Independent Colleges and Universities of NJ.