A ‘Game Changing’ Day for Monmouth 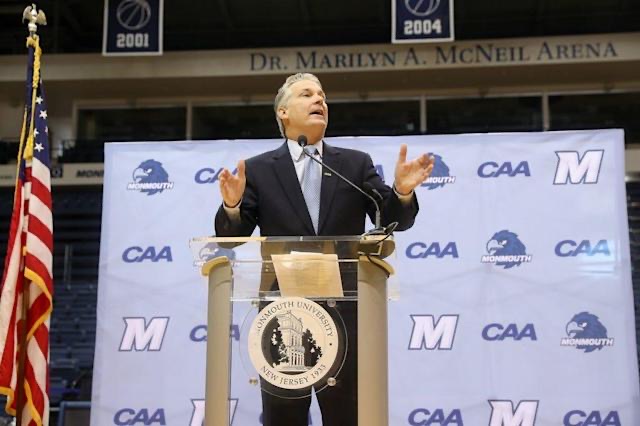 Yesterday, I had the absolute pleasure of attending the press conference held at Monmouth University, during which its President, Dr. Patrick Leahy – – along with the school’s Board of Trustees chair, its Athletic Director, and a representative student-athlete – – proudly announced the school’s official invitation and acceptance to join the prestigious Colonial Athletic Association (“CAA”). I was immediately struck by the overwhelmingly consistent and unmistakable facial expressions of all those who were there to celebrate this ‘game-changing’ announcement – – it was an arena full of broad smiles reflecting the obvious pride and enthusiasm over this incredible accomplishment.

This announcement, which was broadcast live by ESPN, represents a major accomplishment for the Hawks, since it allows them to consolidate 21 of their 22 Division I sports (only bowling is currently excluded, for now) from three separate conferences, which will result in more practical travel to games and create new long-standing rivalries that are more geographically appealing to their student-athletes, students, coaches, alumni and fans throughout New Jersey.

More importantly, and as President Leahy emphasized, this new conference affiliation (which will become effective at the close of this spring season) will enable Monmouth to be associated with some of the most well-recognized and highly competitive academic institutions up and down the east coast – – including William & Mary, Villanova, Elon, Hampton, Delaware, New Hampshire, Rhode Island, Stony Brook, Towson, College of Charleston, Northeastern, UNC-Wilmington, Hofstra, and Drexel.

The value of association with these great institutions is hard to overstate. And while its teams will be challenged to ‘step up their games’, due to the elevated quality of the teams they will now call conference mates, the expanded regional and national exposure will be immediate and noticeable across Monmouth County, New Jersey and beyond.

The Presidents at the schools that voted to invite Monmouth to join their league recognized the excellence of the University and the quality of its students – – a significant majority of which (84%) are from New Jersey. It is my personal belief that these schools also realized that having a member institution located in the state ranked as having the top students in the country will dramatically raise their overall academic profile. Perhaps this new affiliation will result in fewer of our talented students leaving New Jersey and more staying home.

With Monmouth’s ‘game changing’ move to the CAA, our 14 Independent Colleges and Universities are now part of some of the most highly competitive and academically recognized conferences in the country in Division I, where our schools represent 6 of the 8 in New Jersey (the Big East, the MAAC, the Northeast Conference, the Ivy League and now the CAA); Division II (the Central Atlantic Conference); and Division III (the Colonial States, the MAC-Freedom and the Landmark conferences). As a result, it may not be a ‘reach’ to claim that ICUNJ has not only some of the top schools in the US, but also some of the most competitive athletic programs as well.