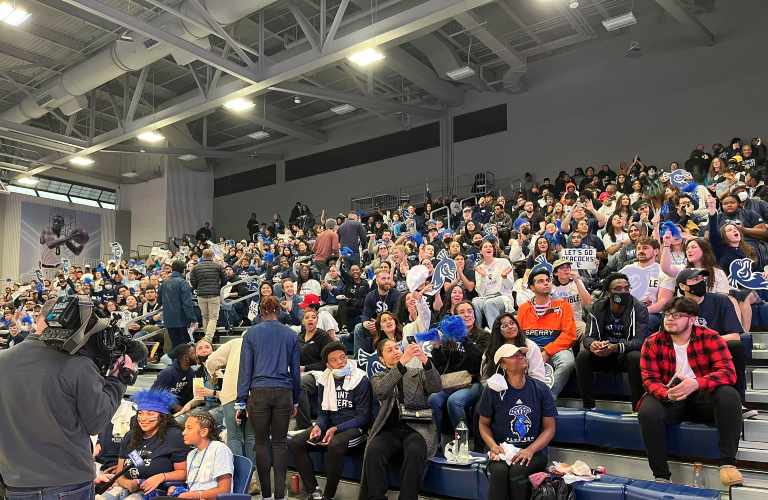 As a former vice chair of the NCAA board of governors who now serves as president of the organization’s diversity and inclusion committee, Sue Henderson has been going to the Final Four for years.

The longtime president of New Jersey City University has seen a lot more than just basketball — she’s seen the impact March Madness can have on the schools and the areas they are from. That’s why she’s convinced the impact of Saint Peter’s Cinderella run to the Elite Eight not only will benefit the school, but all of Jersey City.

“The only analogy I could draw is Gonzaga,” she said. “That would be a school that nobody would know about if they didn’t consistently go far in the tournament. They are who they are because of it, and it’s impacted their community and their neighborhood like nothing else.”

So, while Saint Peter’s run in the tournament may have come to an end Sunday night in a 69-49 loss to North Carolina, Henderson is confident the school — and Jersey City — will benefit for years to come.

The two-week stay in the spotlight highlighted more than just a basketball team, she said.

“One of the things that I’m so thrilled about is that students are getting so much attention,” she said. “The students that go to Saint Peter’s are similar to our students — they’re scrappy, they work hard for everything they get, they’re immigrants and many of them are from Jersey City.

“To see them highlighted is very exciting for all of us.”

Fulop has worked for years to showcase the attitude and atmosphere that can be found in Jersey City in an effort to lure more residents — and companies.

Saint Peter’s has been the best marketing the city has ever had, he said.

“I can’t even express how many people have reached out from across the country that had no idea what Saint Peter’s was — or where it was — three weeks ago,” he said. “Now, everyone is pulling for them.

“It’s easy to love the story, which layers onto the entire Jersey City story. Needless to say, this will transform the school and is just amazing for the city.”

She said she hasn’t seen an immediate uptick in interest — it’s only been a week or two, she said — but she’s confident it will be great for the region long-term.

Henderson agrees. And she feels all three of the city’s higher-education institutions — Saint Peter’s, NJCU and Hudson County Community College — will benefit as more students in the area see the impact of college.

A key reason: They have been working together for years.

When Saint Peter’s needed a place to play last year — when it was refurbishing the small gymnasium where it plays — New Jersey City University was happy to give it access to its court for practices and games as needed.

When Frank Guarini, a former Congressman and prominent area philanthropist, was interested in making substantial donations, Henderson didn’t mind if he spread his generosity around.

“I have told him time and time again that we both have our strengths,” she said. “They do policy work well; we have great arts. I think we play off each other, and that makes the entire city stronger.”

Henderson said New Jersey City University already has seen some increased attention. After all, when you google Jersey City and University, NJCU is more likely to come up than Saint Peter’s.

“What is the saying? ‘A rising tide raises all boats,’” she asked, and then answered. “And it will. It absolutely will. It means good things for all of us. And it’s a good thing for Jersey City.”

Which more people may learn actually is a city — the second-largest in the state.

“I just read an article where they defined Jersey City as a suburb of New York,” she said. “Well, that’s not quite right.”

Thanks to Saint Peter’s, more people are learning the truth.