New Jersey’s independent colleges and universities provide an economic impact of at least $3.5 billion statewide, with 14 member institutions in 8 counties.

Their employees reside in all 21 counties of New Jersey and bring $1.1 billion in wages to their communities.

For every $1 of state investment, independent colleges generate $35 for New Jersey’s economy.

This doesn’t tell the full story, however. Institutions of higher education, by definition, have an eye toward the future, educating the next generation of thought leaders and innovators, and working toward the next advancement in fields such as healthcare and technology, which are critical to New Jersey’s economic growth.

New Jersey has been the highest exporter of college students for decades. Our member institutions provide a much-needed choice that stems the “brain drain” and allows promising students to pursue higher education in New Jersey, and later remaning in the state to make valuable contributions that strengthen our workforce, economy and civic life. 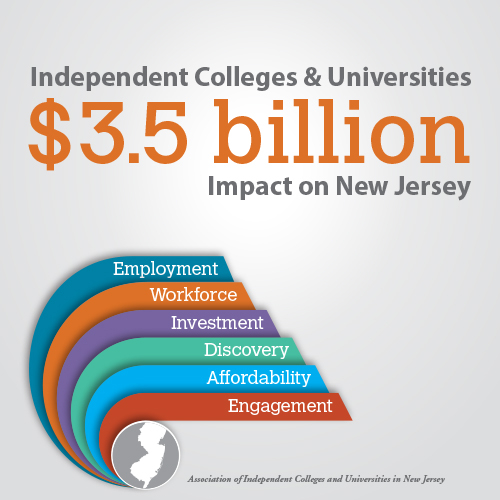